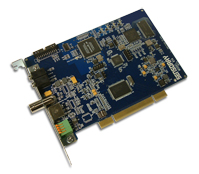 Model 614, from Sensoray, is a low-cost MPEG-4/2/1 and MJPEG frame grabber that captures full-frame (720 x 480) video at 30 frames per second. Uncompressed video is available through the PCI bus for previewing and capturing. It also has two synchronized audio input channels and an advanced image overlay feature that is fully implemented with hardware.

Video Overlay
Captured compressed video can be imposed with up to eight windows of caption or annotation overlay. Text and image overlay are supported. Up to 64 characters or bitmap blocks can be inserted into each of the eight windows. See an example overlay frame here.

Uncompressed capture
The 614 can function as a conventional frame grabber by supplying uncompressed video with low latency and snapshots of single frames.

Audio multiplexing
Digitized audio from the 614 is multiplexed into MPEG streams by a Sensoray-supplied software in the SDK. Hence, the 614 does perform A/V multiplexing as do the models 314 and 616. The audio signal can be connected to the 614 via a stereo audio jack or through the 24pin header.

Advantages of compression
MPEG and MJPEG data reduces the amount of memory required to store full motion video. The compressed data requires a smaller transmission bandwidth. MJPEG data is typically compressed by a factor 20 while MPEG-2 and -4 by a factor of 100. Image compression makes it possible to transmit 30 frames/sec of MPEG video over the PCI bus. The hardware compression circuit uses a motion estimation algorithm to produce smooth images from interlaced cameras.